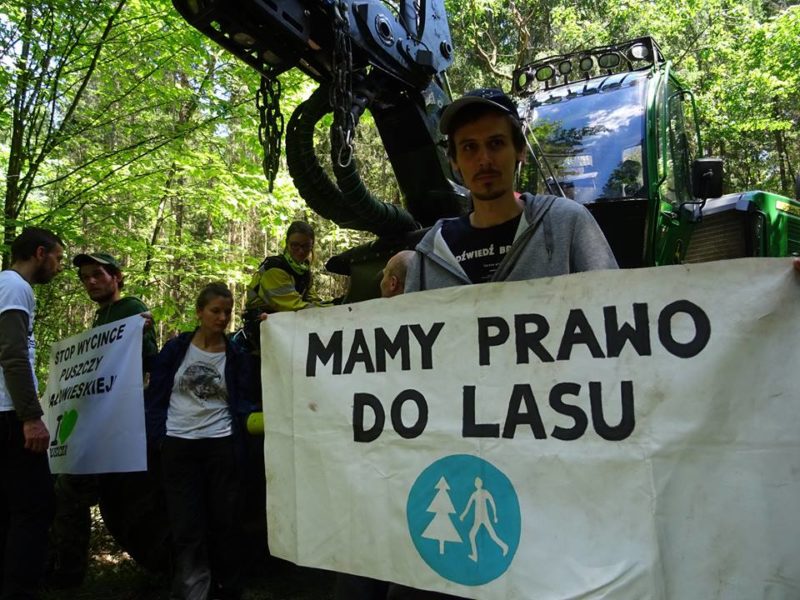 Over 20 Greenpeace and Dzika Polska activists once again blocked heavy machines for mass timber harvesting in the Bialowieza Forest. Recently, the machines have been felling trees in UNESCO conservation zones in Browsk Forest District (one of the 3 forest districts). The protest’s goal is to attract attention to the visit to the forest of UNESCO countries’ representatives (22 June 2017). The meeting had been kept secret and no NGOs or scientists opposing Minister Jan Szyszko decisions were invited.

Activists blocked a huge machine with their own bodies and spread out banners saying: „Stop the logging” and „National Park over the entire Forest.”

‘Minister Szyszko pushes the limits of reasonable thinking. It is incredible that two weeks before UNESCO summit, which Poland is going to be the host of, Minister Szyszko in such a determined way tries to lower the forest’s prestige and to ridicule Poland. Not only does he let harvesting machines devastate the forest, but also he keeps telling nonsense about its unlawful inscibing onto the UNESCO World Heritage List,’ said Katarzyna Jagiełło from Greenpeace. ‘He also started pressing his buttons: representatives of different countries from the UNESCO Committee were brought to Bialowieza. What is quite typical of the minister, no NGOs or scientists were invited. They would have been able to show what the real devastation of the Bialowieza Forest with heavy equipment is – also in the UNESCO zones.’

‘Minister Szyszko tries hard to undermine the value of the forest as the world heritage – we cannot let it happen. That is why we go on with the blockades of heavy machines. In iswith the minister’s consent that the forest is being  logged also in the protected areas, which means that the most precious, UNESCO conservation parts of the forest are disappearing,’ said Adam Bohdan from Dzika Polska.

Results of forest patrols by Greenpeace and Dzika Polska unanimously show that this year’s felling is taking place in the old, invaluable parts of the forest that until present were not subject to logging, among others, the UNESCO zones. According to data from the three forest districts, about 40% of the logging was conducted in those areas of the forest that in line with Polish obligations towards UNESCO should be excluded from logging. Tree felling in those areas has not stopped until now, despite the fact that at the beginning of June UNESCO experts expressed their concern about the situation in the forest in a draft document prepared for the UNESCO summit in July. They also made a request to start the formal procedure that would help find out whether Poland should not be inscribed on the UNESCO Word Heritage is Danger List. The document prepared by experts will be discussed during the 41. Session of the World Heritage Committee the beginning of July in Cracow.

The 5th blockade was taking place in the UNESCO protected areas. Peaceful protests in the Bialowieza Forest began at the end of May. Since then many concerts, civil actions,e.g. walks to the forest to break the entry ban, solidarity manifestations have been held. They have one common message: national park over the entire forest! 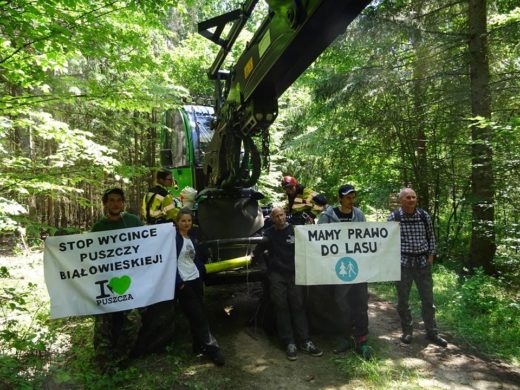 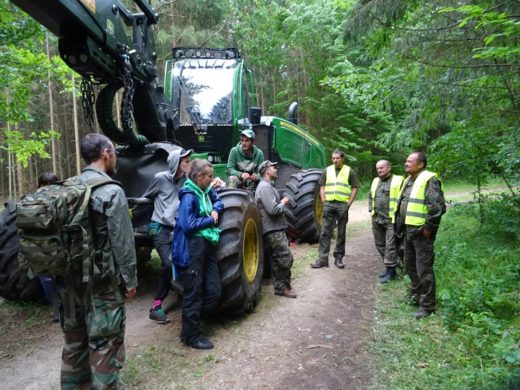 The blockade finished in the evening of the next day. Activists spent the night in the forest. They were not discouraged by heavy rain and cold. Also no force was used against them this time, however, their identity was checked and names written downby forest guards. Activists managed to save many trees from being cut, to attract attention to the situation in the forest and to protest against the destructive policy of the Ministry of Environment.