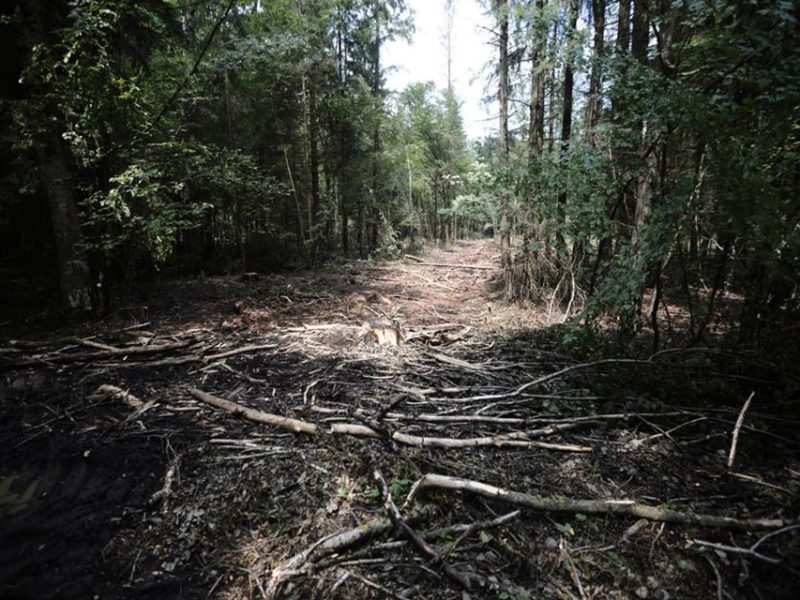 On July 25 another protest against commercial logging took place in the Forest near Nowosady (vicinity of Hajnówka). Harvesters were logging old-growth forest, not planted by man, dominated by old alders and spruces, with many oaks even over 180 years old. Timber extraction was conducted in the 3rd UNESCO zone, where logging is banned by law.
Apart from Polish activists also supporters from the Czech Republic, Slovakia, Germany, the Netherlands and Australia took part in the protest.
Forest guards and the police show less and less respect for the protestors and disregard their safety. Today an attempt to run over one person with a forwarder took place.

The last European primeval forest is being destroyed. We cannot be idle! 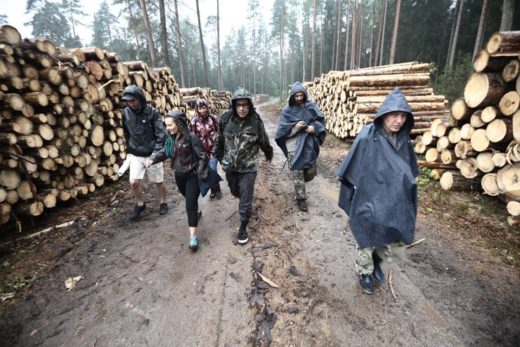 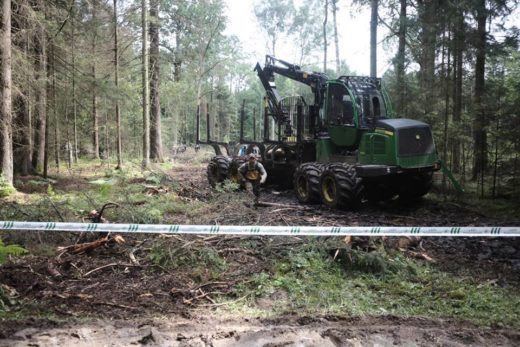 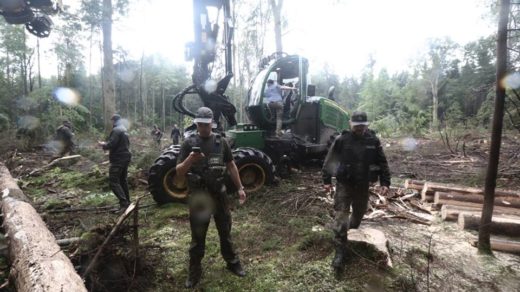 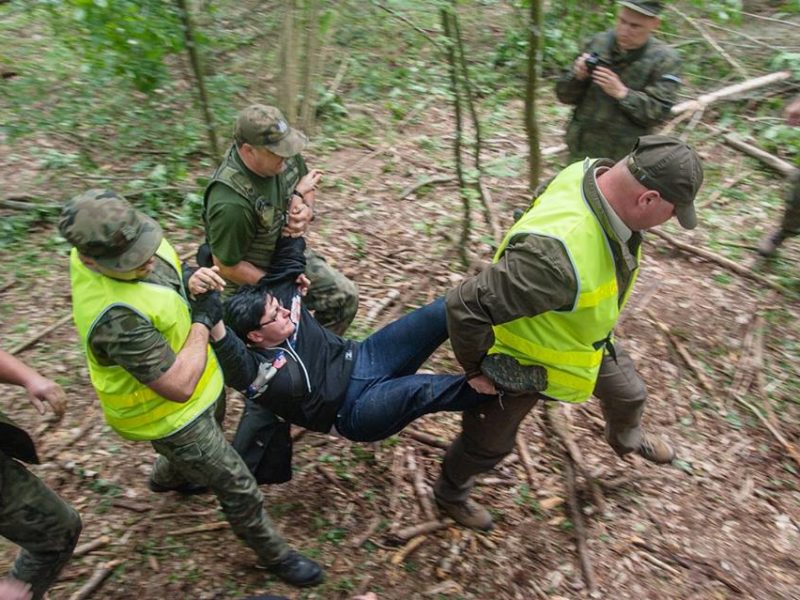 Despite all decisions, calls, scientific evidence, European Commission referring Bialowieza Forest District to the EU Court of Justice, the logging is going on without any change and without a stop. Moreover, like an evidence that nothing is going to change and to try to prevent any future blockades, K. Tomaszewski – general director of State Forests – has decided to send even more forest guards to the Bialowieza Forest.
At present there are 3 additional guards from each regional directorate sent to Białowieza Forest – 48 in total. However, to ensure ‘continuity of management activities’ 4 instead of 3 guards are to be delegated from each regional unit of State Forests, beginning with July 23rd. It gives 64 instead of the current – also recently increased – number of 48. Most probably, this is the reaction to the blockades that the activists managed to carry out despite the presence of numerous forest guards and the police.
It should be added here, that the forest guards are more and more agressive and disrespectful towards the activists.

Below you can see photos from the violent intervention during the last blockade. (Thank you Małgosia Klemens for the pictures!) 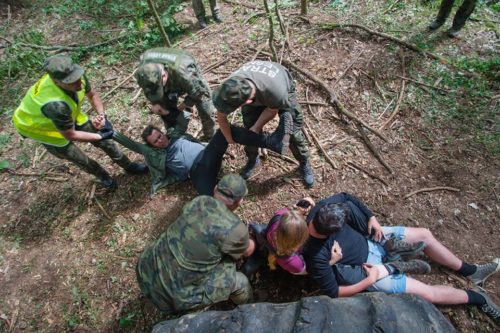 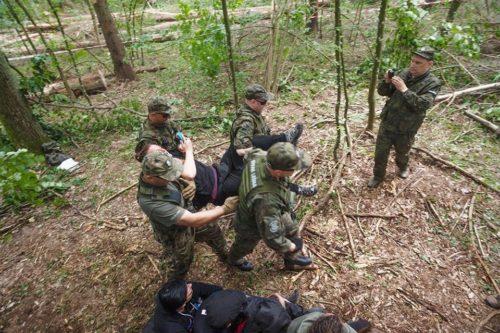 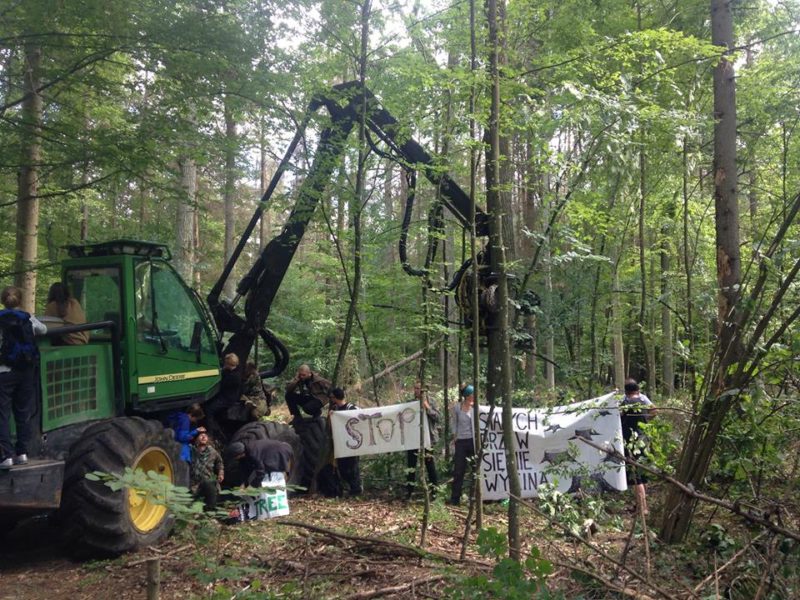 Yesterday in the evening, after about 8 hours, 10th blockade came to end.

25 activists from Poland and the Czech Republic blocked the heavy machines in an old-growth forest stand near Bialowieza. The activisits managed to climb up the harvester and joined their arms by means of special tubes, creating something like a human chain. Despite their presence, the harvester’s engine wasn’t switched off, posing threat to their health or even lives. A lot of police and forest guards arrived at the site of the blockade. They warned the activists that if they wouldn’t quit, force would be used against them. And this is what indeed happened. The police and guards broke the blokade and started carrying out all the activits, one by one, holding their legs and hands, twisting their limbs, behaving in a very arrogant way. No media was allowed. The activists said they would leave if Krzysztof Schmidt, PhD. from Mammal Research Institute Polish Academy of Sciences  in Bialowieza was admitted to the site to check the condition of the Forest in this place and make sure what the planned area of the logging was. However, the scientist was not allowed at the site.

Once the owner of the machine ensured that he would finish his work on that day, and when the forest guards promised the activists could leave the place, the protestors decided to finish the blockade.

Bialowieza Forest District, where the logging has been taking place, has been brought to the EU Court of Justice and called to stop logging. Also UNESCO has recently addressed Polish government asking to bring this destructive action to an end. Nevertheless, the devastation goes on and decisions and regulations are being violated.

Below you can find a short film showing violent intervention of the forest guards. 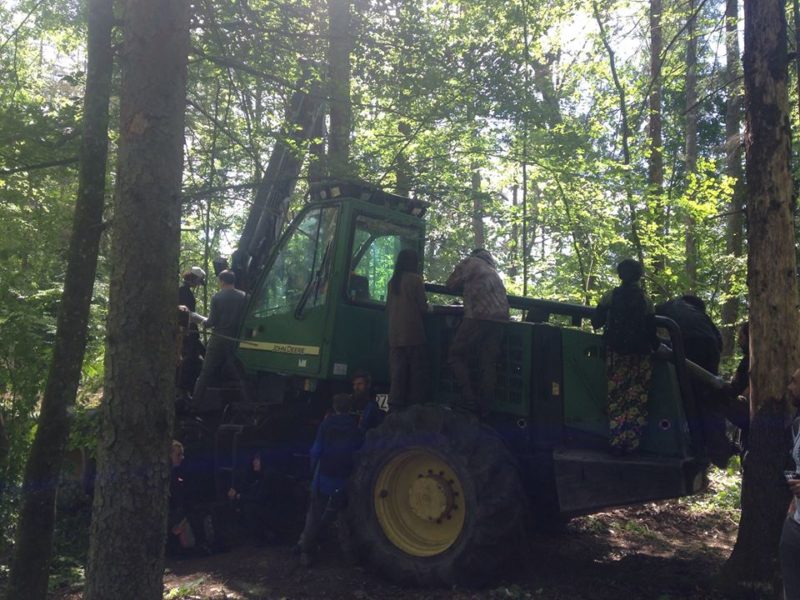 As the UNESCO decision and EC proceedings have no result and the LOGGING IS BEING CONTINUED THE SAME AS BEFORE, today before noon the 10th blockade of harvesters has started.

It should be kept in mind how much effort each blockade takes. Despite international decisions, Ministry of Environment does not react and the effort to block harvesters is increasing. The machines are accompanied by an army of the police and forest guards from all over Poland. Moreover, the guards have become increasingly aggressive and abuse their power.

The blockade is held in the forest district against which legal procedures were started by the European Commission. Today before the blockade the harvesters were destroying old-growth forest there. Each day of a pair of harvesters at work means 200 – 300 trees cut down to the ground. This irreversible damage has to be stopped!

We will add information about the development of events. 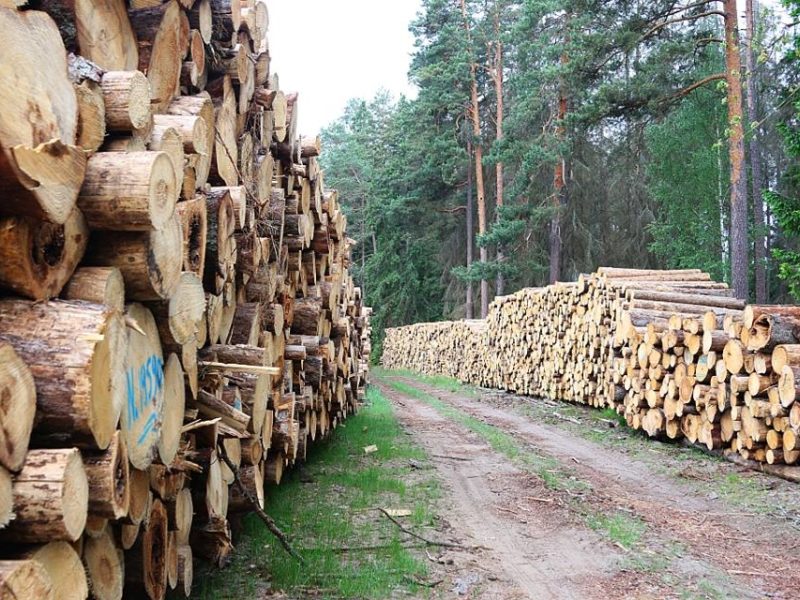 Today the Commission refers Poland to the Court of Justice of the EU for illegal logging in the Bialowieza Forest. By increased logging, Minister Szyszko violated European Union’s nature legislation. If Polish government does not comply with the judgement, we may have to pay a-few-milion-euro penalty.

Bringing the case to the Court of Justice shows that the pri-litigation stage of the procedure ended with Minister Szyszko’s failure. His vision of ‘saving’ the Forest by logging did not convince the experts.

Non-governmental organizations (ClientEarth Prawnicy dla Ziemi, Dzika Polska, Greenpeace, Greenmind, OTOP, Pracownia na rzecz Wszystkich Istot, WWF) already in 2016 pointed to the fact that the decision to increase logging in the Bialowieza Forest violated both the Polish and UE’s regulations. Not only did the Minister of Environment ignore the appeals of NGOs and scientists, but also for the first time in the history of the Bialowieza Forest, he used heavy timber-harvesting equipment. During the last few months hundreds of hectares of natural forest stands had been cut down. These damages will not be remedied within the centuries to come.

Nature organizations announce that they will keep monitoring Minister Jan Szyszko’s activity in the Bialowieza Forest, especially the implementation of last week’s UNESCO decision and today’s EC’s decision. Along with all the defenders of the Forest protesting against the logging that breaks the law and international commitents of Poland, and is also incompatible with scientific knowledge,  NGOs will aim at protection of the entire Bialowieza Forest as a national park. 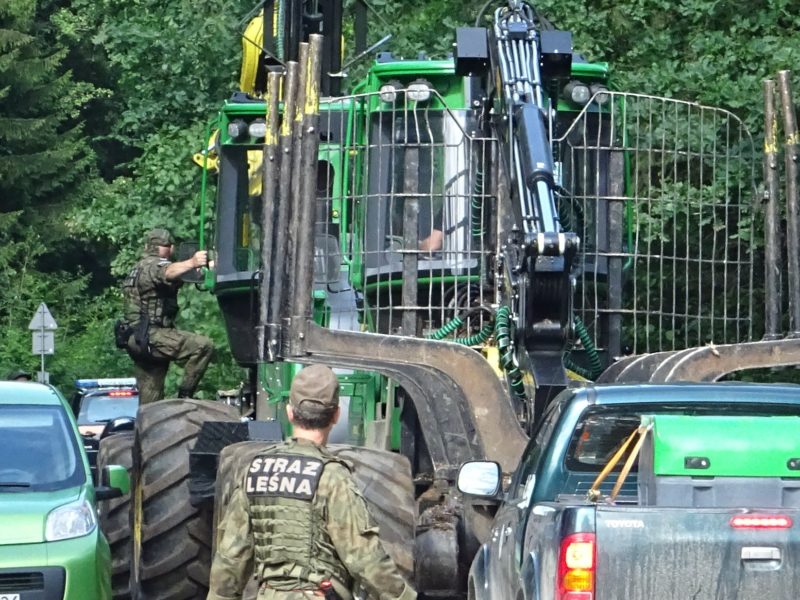 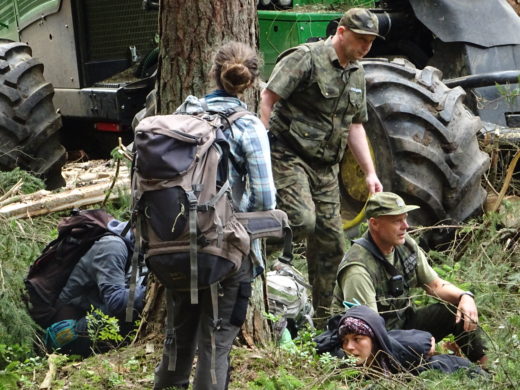 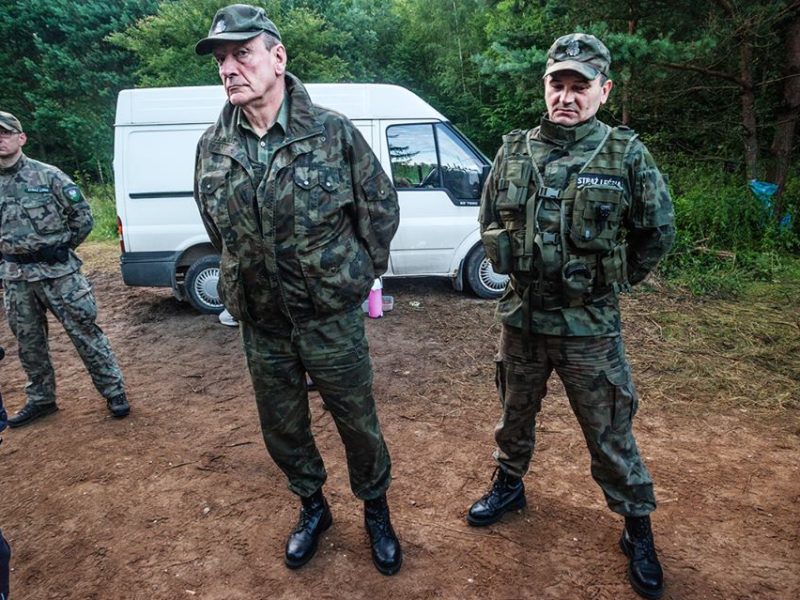 Forest guards more and more often use open violence towards activists in the Bialowieza Forest. On the other hand, however, they remain indifferent in situations when people operating the harvesters pose threat to life or health of the protestors.

A few days ago the activists turned up in Browsk Forest District, near a place where a meeting of Forest Guards was taking place. The guards had come to the Forest from all over Poland to keep an eye on the harvesters and ensure continuity of the logging. One of the workers of the Browsk Forest District stated that as an inhabitant of the Forest for many generations back he was against any outsiders, people from elsewhere, taking their stand for the protection of the Forest. Then, he tried to hurt one of the activists by hitting into him with his car and repeating ‘I will not let it happen.’ The forester was punished by the police for posing threat.

Please, watch the film from this happening.

Activists from Dzika Polska and Camp for the Forest recorded harvesters at work a day after the UNESCO decision to stop logging in old-growth forest stands.

The works were conducted in Bialowieza Forest District and stopped only yesterday. It was the first time timber-harvesting machines were used in this forest district. Because of the annex from 2016 to the Forest Management Plan for Bialowieza Forest District (which set the huge number of 188,000 m3 of timber to be extracted only from this forest district until 2021), European Commission started proceedings concerning this forest district. The EC calls to halt logging in old-growth forest stands. Ecological NGOs regularly inform the EC about violation of Nature 2000 regulations. It is hoped that within the nearest days the EC will bring the case before the Tribunal and will apply provisional messures such as the absolute ban on logging in old-growth forests.

Follow the link to see scars on the Bialowieza Forest after only a few hours of harvesting machines at work.

Also check GET INVOLVED for what you can do to help save the Bialowieza Forest. 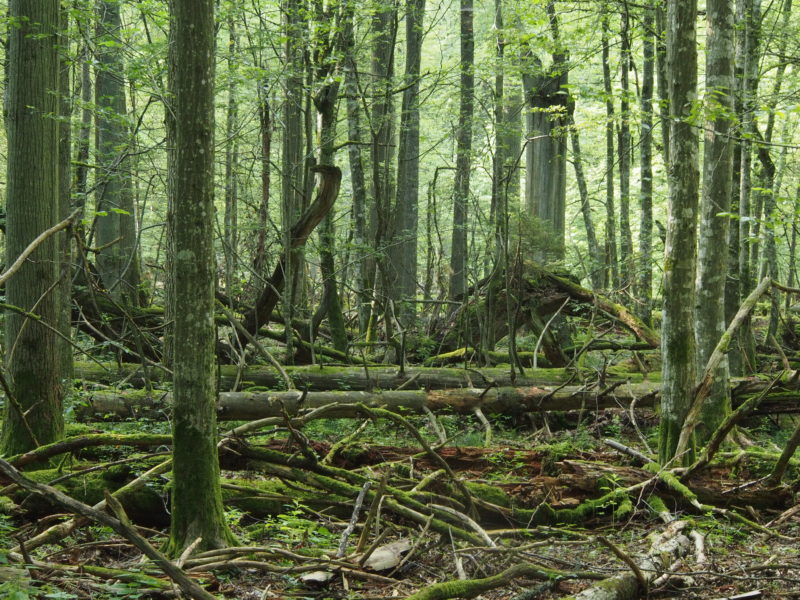 Recognized academics and rectors of most distinguished Polish universities – Warsaw University, Jagiellonian University in Kraków, Warsaw University of Technology and President of the Polish Academy of Sciences wrote an appeal to Polish government to stop the logging in the Bialowieza Forest – the best preserved natural forest in Europe.

‘Bialowieza Forest is a priceless national treasure and a symbol of Polish nature recognized worldwide,’ they said. They pointed at the huge effort on the part of Poland so that the Forest would be added to the UNESCO list. ‘Under no circumstances should the Bialowieza Forest be managed like an average wood,’ the professors emphasized. They also added that the current management can lead to irreverseable damage and that might take millenia to recover from. They also noted that the bark beetle outbreak is due to climat change and, finally, called for protection of the Forest, which constitutes only 3.4% of Polish woodlands. ‘Let nature decide,’ they wrote in the letter.

This is one more significant voice for the protection of the Forest that is being ignored. At the end of June 33 deans of Polish universities also addressed the government to stop logging, but with no result.

Even the UNESCO decision is being ignored and the logging goes on. We still need to show our support and fight for the Forest!

You can find more appeals under this link. 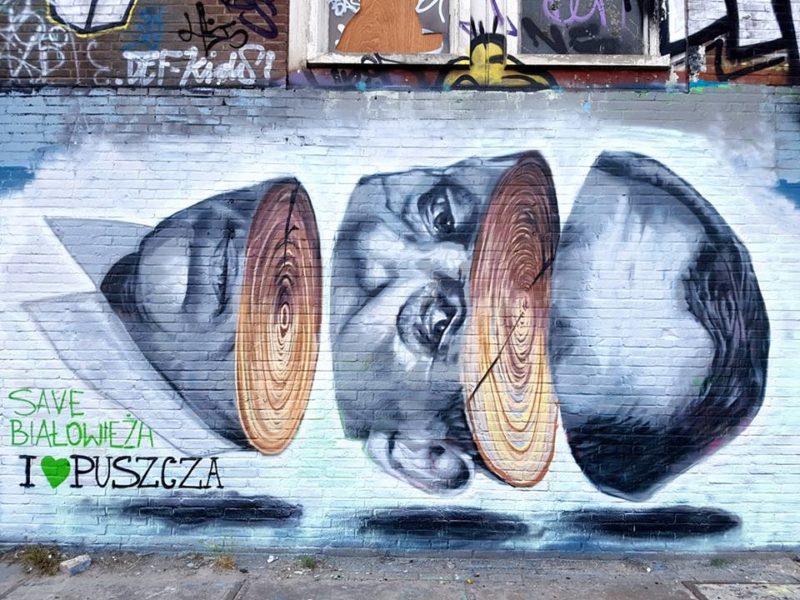 After the difficult and exhausting blockades in the Forest last week, the weekend was a time to take a break. On Saturday an educational walk to the Forest set off from Pogorzelce (near Bialowieza). The participants could learn more about natural forests, spruce bark beetle, natural processes etc. In the evening in nearby village of Teremiski a concert for the Forest took place and gathered quite a numerous group of people.

We are also happy that the news about the Forest and the wave of support spread wider and wider across Europe. This weekend a solidarity action took place in London. Also a mural for the Forest appeared in Amsterdam.

If you organise some action to support the Forest, do let us know. We will be glad to write about it here and inform others about what you are doing. 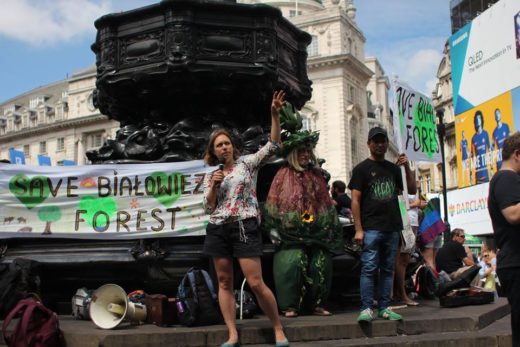 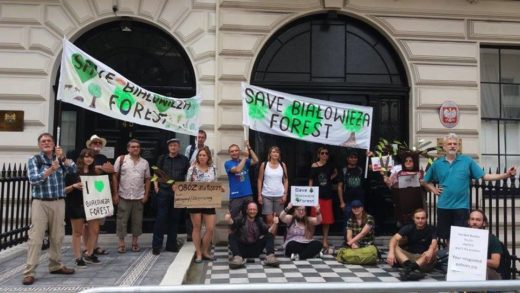