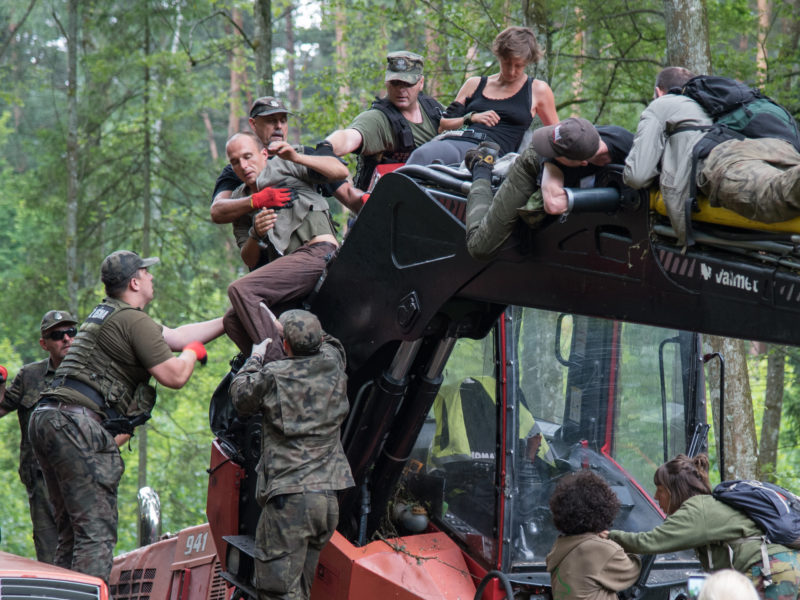 Yesterday in the morning activists managed to block harvesters logging in the Bialowieza Forest District, where timber extraction limit has already been exceeded, and where any work has been banned by the European Court of Justice. Trees over 100 years old were being cut down.

The State Forests explain that all the works are justified by safety reasons – be it case of an accident or a fire. However, this year’s summer has been rainy and humid, and the possibility of a fire is much lower than previous years, when the forest suffered from severe droughts. Moreover, the trees were and each day still are felled far away from roads and tourist routes. Yesterday they were cut down in the distance of 80 metres from the road, whereas the hight of trees hardly ever reaches 50 metres. Moreover, cutting down and selling of trees is not necessary to ensure public safety along trails and roads. In the woodland district of Bialowieza – where restrictions on logging have been breached and this on territories of high natural importance [hundred year old trees, protected habitats] trees which are at risk of breaking or falling should be cut down and left in place to decompose naturally. This is how the foresters work along the Białowieża – Hajnówka section which is close to a highway. This is also how risk was managed as a result of the poor condition of 200 year old trees in other parts of Bialowieza Forest.

After almost 9 hours of blocking the machines, the blockade came to end in the evening. Activists managed to save many trees and once again voice the protest againts illegal logging. 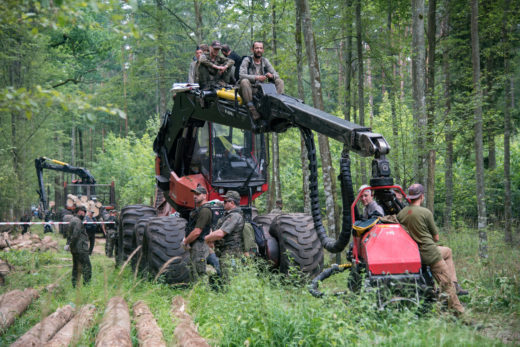 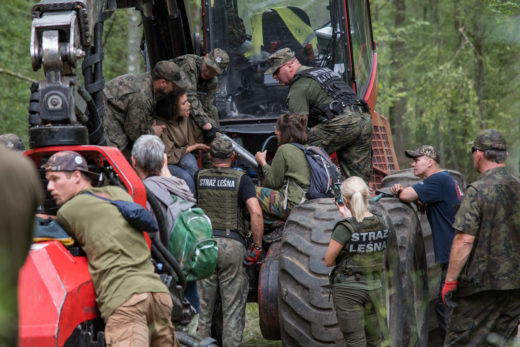 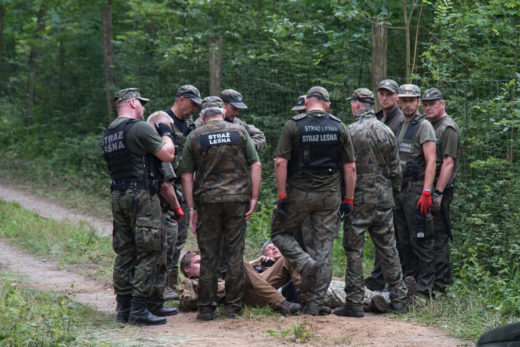 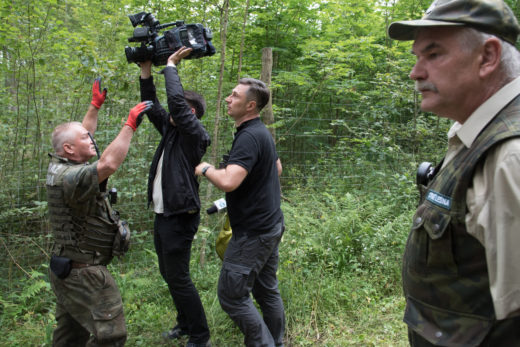 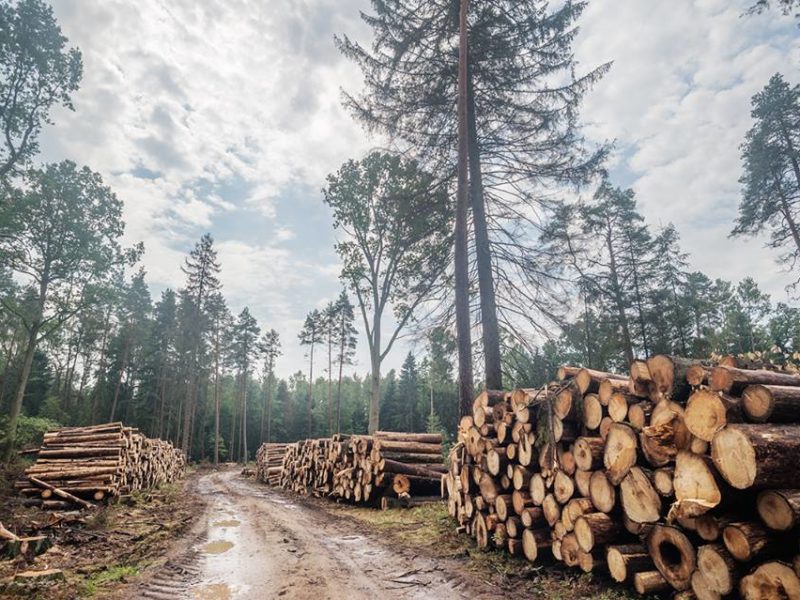 Yesterday at a press conferene minister Jan Szyszko said that Poland would answer to European Commission’s allegations. However, what has been going on in the Forest is just and only active protection of forest habitats protected by Natura 2000.
‘We are truly grateful for the devotion of the EC and European Court of Justice to the Białowieża Forest issue,’ said the minister. However, he also regretted that the Court’s decision reached media first (and the left-wing ones), and not the Ministry itself. Once again the minister refered to the cataloguing and data collection that had taken place in the Forest and on the basis of which an experiment had been started. The experiment is to show the results of ‘active protection’ compared to its lack. The aim is to show who is right and who is to blame – what people and organizations – for what has been happening in the Forest.
‘Poland can boast with unique biodiversity. Our natural resources can serve as a model to the whole world. And all this was possible thanks to Polish mind-set.’ The minister also stated elsewhere that there are about 1.3 million infected spruces in the Forest and that everything should be done to remove them this year.
According to minister’s mind-set harvesters heal the Forest, therefore, in an unprecedented way, Poland breaks EC’s emergency ban and the logging goes on as before.
Also yesterday, to show the fact that the logging is being carried out without a stop, another blockade of harvesters took place in Browsk Forest District, near the village of Świnoroje. Despite the numerous troop of forest guards, the activists managed to block the machines for a few hours.
‘We are not going to give up our fight,’ activists say. 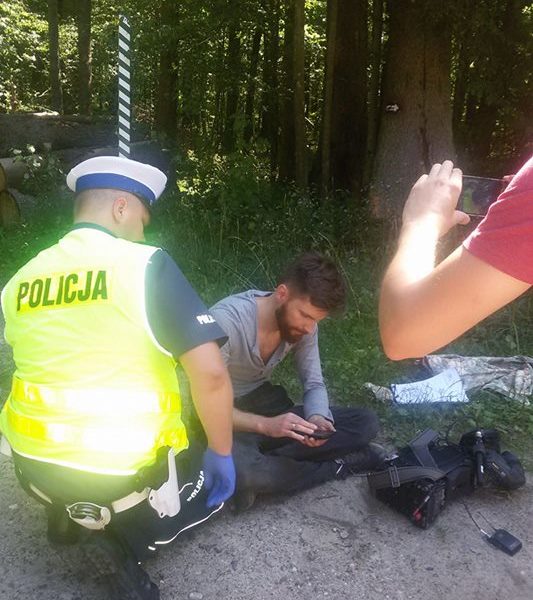 European Court of Justice bans logging in the Bialowieza Forest – saws and harvesters have to stop their work immediately. It means that according to the Court of Justice the increased logging can cause serious and irreparable damage to this priceless piece of nature.

To stop the logging the European Court of Justice adopted interim measures, which are granted by the Court in exceptionally urgent and serious cases that have to be decided upon with immediate effect. These measures are used very rarely and only when there is a threat of considerable and irreversible damage.

The decision of the Court confirms what the European Commission, UNESCO and majority of scientists emphasized before – it is the increased logging and not the spruce bark beetle that threatens protected forest habitats ad species, therefore the logging should come to an end before the devastation becomes irreparable.

At the same time, in the Forest protests of activists that come from all over the world are still taking place in order to stop the timber harvesting machines on the spot.  The participants alarm that forest guards who were sent to the Forest from all over Poland to protect harvesters are becoming increasingly violent and often pose a threat to health and lives of the protesters. 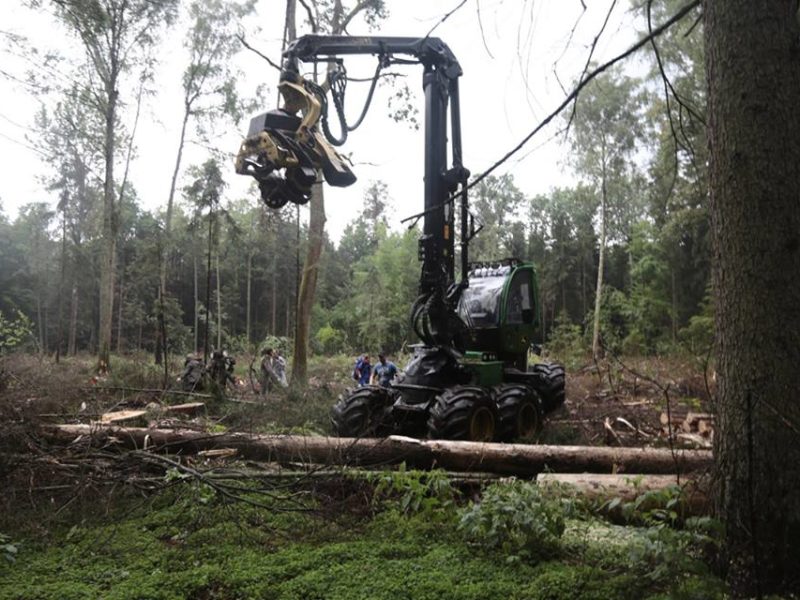