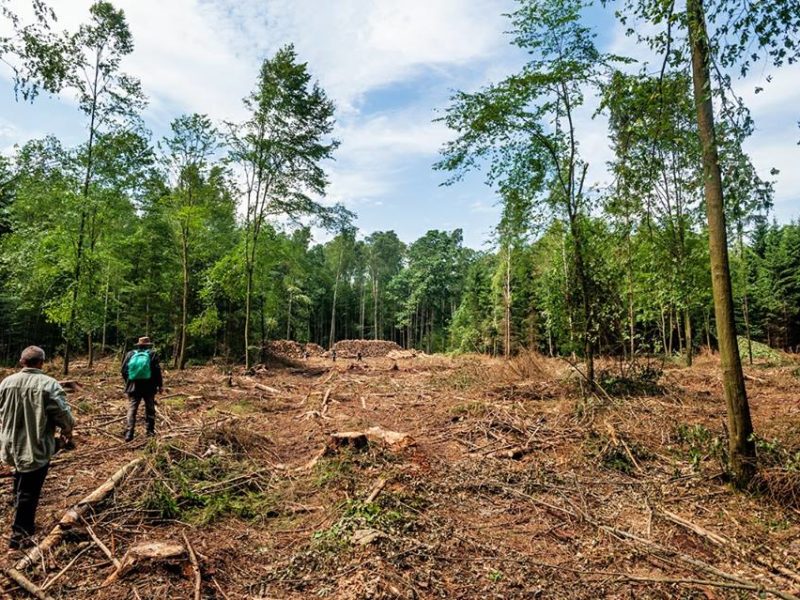 On the 4th of August, which was the deadline given by the European Court of Justice, the Ministry of Environment presented their standpoint about the Białowieża Forest. Despite the Court’s decision that logging should be stopped immediately, the Ministry says they will continue their works in the Forest. They keep repeating that they are protecting forest habitats and valuable species, ensuring public safety, preventing great loss of money and all these in line with Polish and European law.

Please, read the commentary to the Ministry’s response.

1. The Ministry of Environment emphasizes that their action in Białowieża Forest is in line with the Birds and Habitat Directive and even necessary for nature protection.

Recent actions of the Ministry mean logging of natural, frequently over 100-year-old forest stands conducted at an incredibly quick pace and with very invasive machines – harvesters. These forest stands are replaced by plantations, which undoubtedly contributes to destruction of habitats and species protected by the directives. Therefore, such actions violate the directives. According to Natura 2000 conservation management plans, which regulate forest management in Bialowieza Forest, removal and shortage of dead wood poses major threat to crucial habitats and species connected with old-growth forests. Because of that 100-year-old forest stands should not be cut down. The mass logging taking place in the Forest is exactly a contradiction of Natura 2000 nature conservation regulations. This fact is confirmed by protection plans according to which the condition of habitats in the Białowieża National Park (where no timber extraction is allowed) is correct, while outside the National Park this condition is often insufficient or even bad due to timber extraction. What can also be observed in the Forest is the diminishing numer of spruces in deciduous and mixed forest stands, which is absolutely in line with Natura 2000.

2. The Ministry is of an opinion that European Commission did not show in a sufficient way the probability of serious and irreparable damages due to interventions at the protected areas of the Forest.

Extend of the damage caused to the Forest ecosystem is huge. Hundreds of hectares of the Forest have been cut down to the ground by harvesters, at least 1/3 in over 100-year-old forest stands. In Browsk Forest District already until mid-July the amount of harvested timber reached the numer that according to the management plan was set for the whole year. Białowieża Forest District over last four years has exceeded the logging limits planned for 10 years in the forest management plan. Enormous clearings can be seen in in satellite photos taken at regular time intervals. Moreover, logging has been carried out during birds’ breeding and nesting season, and timber is sold along with protected beetles, which facts are disregarded by foresters. Commission took all these data into consideration. Certainly, the damages described can, in a way, be reversed and the forest stands can be rebuilt, however, the wounds inflicted to the Forest will take hundreds of years to heal, and the eventual result will still be a forest ecosystem whose ecological continuity was violently disrupted. Some sensitive organisms that occur only in the Forest will not survive this change.

3. In the conclusion of the written statement it is pointed at the fact that giving up the temporary means, which is logging, will cause environmental damage of estimated 3.24 billion PLN.

It is not certain what kind of damage the Minister has in mind when the best condition of forest stands can be observed in places free from logging. Most probably he means the trees that, when dying, become habitats for (no longer present in other forests) birds, fungi, insects and that can be sold for sawmills for much money. This is the kind of damage the Minister has frequently talked about in the Catholic media connected with priest Tadeusz Rydzyk (an influencial priest strongly connected with PiS, the party in rule.)

4. On Monday the Ministry proclaimed that they were not going to give up logging in the Forest.

It defies logic why the goverment lets Minister Szyszko do that. Apart from legal and financial consequences, we are witnessing an unprecedented reputational failure of our country. During last weeks media all over the world released hundreds of footages and articles on Minister’s behaviour. Many most important information agencies from abroad are planning a visit to the Forest. And things are going to happen for sure, as also foreign activists are coming that will go on with the blockades.

5. On Thursday the Ministry of Environment emphasized that only works ensuring public safety are conducted in the Forest and, as such, they are in line with EU Court of Justice decisions.

This is not true. The logging is of typically commercial character:

– trees are cut down even over 100 metres fromthe road, while the height of the highest trees in the forest rarely exceeds 50 metres;

– felled trees are cut and carried out from the forest on the so called forwarder;

– websites selling timber offer thousands of cubic metres of timber from the Forest.

Cutting down and selling of trees is not necessary to ensure public safety along trails and roads. In the  forest district of Bialowieza – where restrictions on logging have been breached and also on territories of high natural importance [hundred year old trees, protected habitats] trees which are at risk of breaking or falling should be cut down and left in place to decompose naturally. This is exactly the procedure in the Białowieża National Park and in nature reserves, which are manager by foresters.

Commented by Adam Bohdan – biologist, author of many scientific papers and reports on Białowieża Forest species that have been used for protection plans of the Forest. In recent years he has been monitoring the scope of logging in the Forest. He presented the monitoring results i.a. to European Commission.