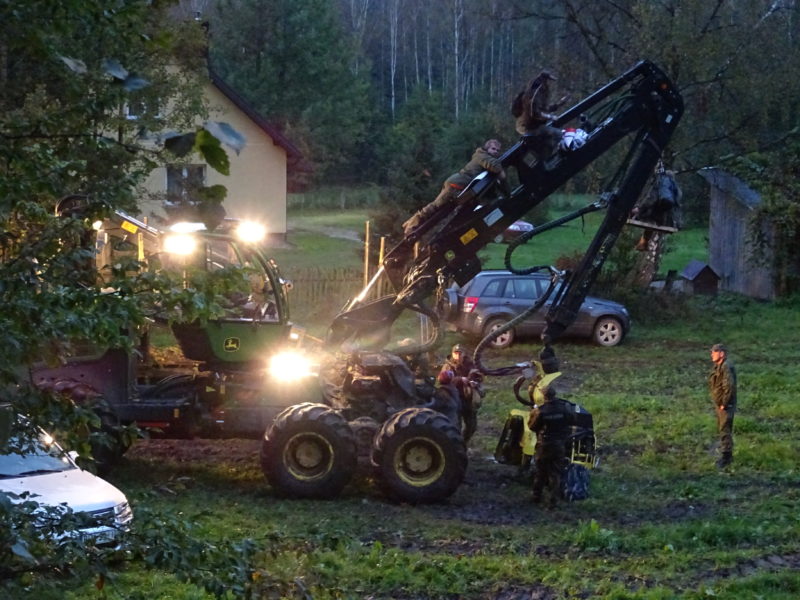 Last Friday Minister of Environment undermined the credibility of materials documenting the logging in the Forest that were sent to the European Court of Justice. It can be assumed that the resort denies the fact of intense, commercial logging. They also claim that the only works carried out at present aim at public safety, while not so long ago it was the spruce bark beetle that served as an excuse. In answer activists are blocking heavy machines to show evidences and places and where logging take place.

04 and 05.10.2017 Activists from the Camp for the Forest blocked logging and transport of timber in three places: on Wilczy Trakt – a forest road near the village of Teremiski, where huge piles of logs are stored; near the educational centre in Grudki and at the parking space near the village of Podwaśki.

At the parking lot in Podwaśki, after two hours of protest, the blockade was broken in a violent way. Men operating the machines started the engines and put the long arm of harvester with protesters attached to it into motion. One of the workers took active part in pacification of the blockade, tearing one of the activists and pulling him away, even though he had no right to do that. One of the forest guards used a knife to cut the tapes by means of which the protesters had their hands tied together inside the tubes they put on to create a human chain. Some of the activists got slightly hurt as a result. What is more, some girls were pulled out from the tubes by force and by two forest guards at the same time.

One of the activists was detained by the police for a more than 24 hours for the alleged breach of bodily integrity of one of the officers.

The second blockade – in Grudki – came to an end after about four hours, after an agreement between the machine operators was reached. Once the activists left, the workers took the machines back to the parking lot, where they were to remain till the evening.

The third blockade – on Wilczy Tryb, near Teremiski – is not over after 34 hours. Blockade is closing forest route from both sides for harvesters and trucks where huge stores of wood are waiting for sale and transport. Barrels with concrete were placed there and a platform was hung on ropes among the trees to make it impossible for logging and transporting machines to enter.

videos from blockades at Wilczy Tryb:

Tracks that came for the logs, left the place empty.

watch video from the road full of spruces: 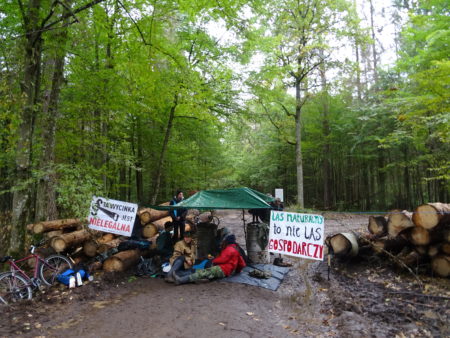 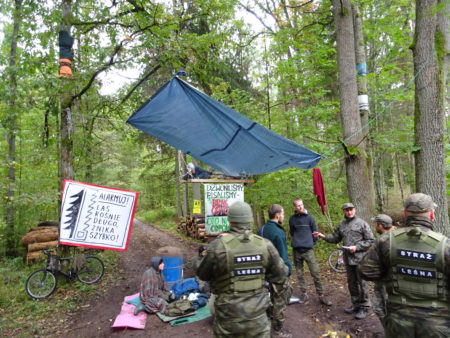 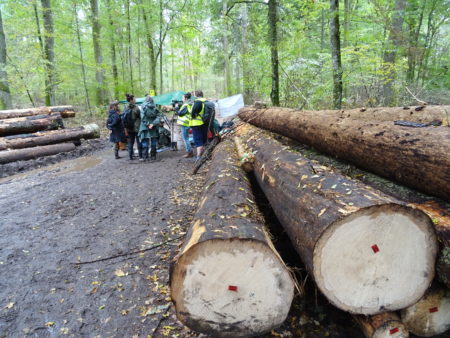