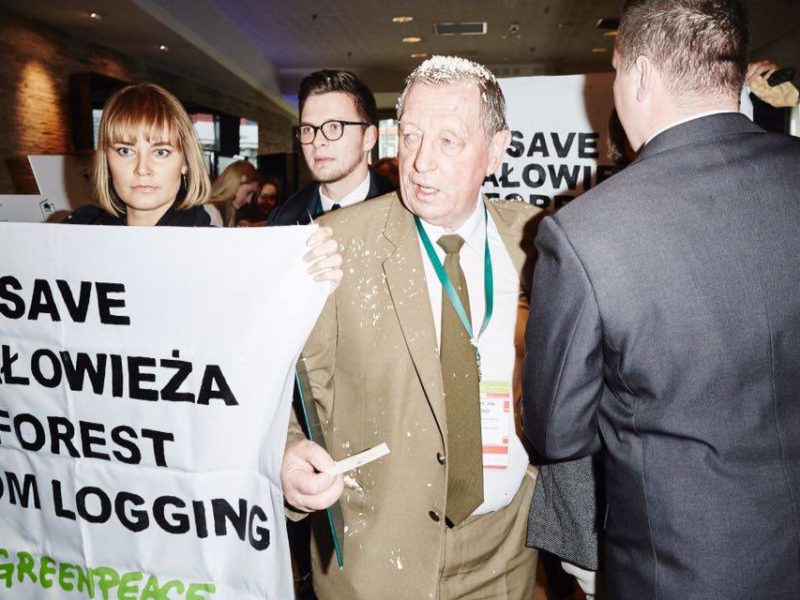 On the 9th of October Minister Szyszko opened the Joint Session of the 39th European Forestry Commission – 75th Committee on Forests and the Forest Industry in Warsaw.

Review of the activities from 2017 and those planned for the upcoming year can be found HERE.

The minister also wrote a letter to the participants, inviting them to a High Level Meeting on forest industry. The letter is an invitation to the European Forest Week, during which functional models of forests – ‘our common good’ – will be taken into consideration. You can read the letter HERE.

Minister Szyszko tries to show himself as a defender of forests. He also keeps claiming no logging is taking place in the Bialowieza Forest, only the sanitary cuttings, which of course is a lie. In some places there is no Forest anymore. Just have a look at the video below, made in a place that not so long ago was still wild and beautiful:

To protest againsts such hypocrisy Greenpeace activists threw sawdust at the minister during the opening of the conference in Warsaw.

At the same time, in the Bialowieza Forest, the blockade on Wilczy Tryb, blocking access to the Forest for tracks transporting timber for commercial purposes, is still going on – for a week now!