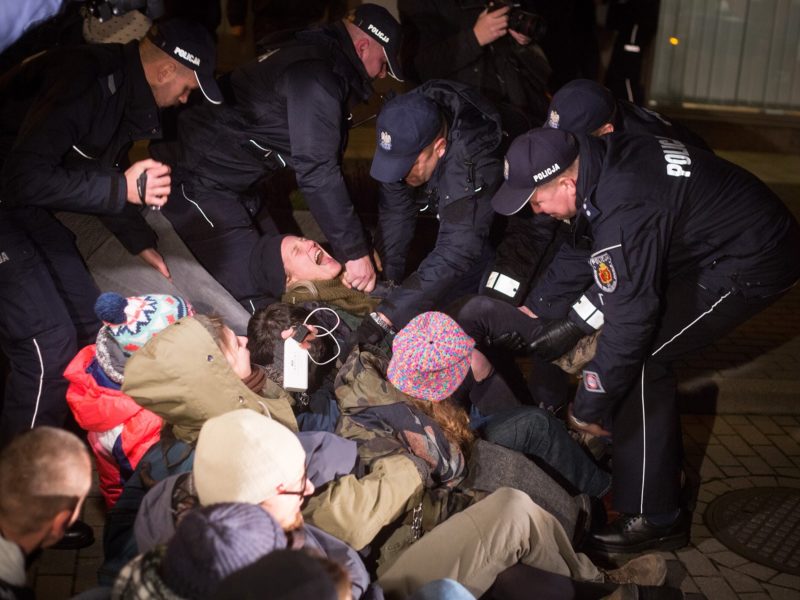 Citizens, scientists, activists have been calling for months to withdraw harvesters and stop logging in the Bialowieza Forest. To no result. The only answer on the part of the state is violence.

Never after the 1970s was the Forest so intensely logged – until 2017, when the amount of timber harvested in all three forest districts of the Bialowieza Forest was increased a few times as compared to previous years. Dozens of demonstrations took place in recent months, hundreds of petitions were written, and in the Forest itself about 20 blockades of heavy equipment and timber transports were held. Earlier this year UNESCO Committee and then the European Court of Justice requested immediate halt to logging in the Bialowieza Forest. Nevertheless, things look the same. Activists who are still present in the Forest meet harvesters every day. Clearly, there is one state institution, closely knit with the government, that remains indifferent to any kind of protest – the State Forests that own c. 30% of Polish territory and are one of the richest companies in Poland.

As the State Forests ignore protests in the Forest itself, activists decided to organize and action at their headquarters in Warsaw. Activists called for repealing the decision no. 51, which permits logging in old-growth forest stands, for withdrawing harvesters from the Forest and for putting an end to sales of logs from the Forest. Last but absolutely not least, they stood for all of the Bialowieza Forest becoming a national park, which is in line with the project prepared by the President Lech Kaczyński, tragically killed in a plane crash in 2010, and a brother of Jaroslaw Kaczynski – leader of the current radical party in rule.

On November 9., at 9 a.m. a few dozen of people sat down on the ground by the main entrance to the building and in the hall that is open for public access. Activists put out their posters and banners, attached themselves to one another by means of pipes and chains and requested for a meeting with the directors of the State Forests. Instead of the State Forests principals, more and more police appeared. After 1 p.m. there were about a dozen of police cars for c. 100 protesters. Soon 20 people sitting inside the building  were cut off from the rest of the activists by the police line. Throughout the whole day nobody from the State Forests came down to talk to the activists. At 5 p.m. the police started pacification of the peaceful protest. About 70 police officers blocked the area in front of the building and started pulling the activists out. All the protesters were handcuffed, pushed into police cars and taken to the police station in Opaczewska Street, Warsaw. 22 people altogether ended up in custody, accused of violation of domestic peace, which may result in a year imprisonment.

After 6 p.m. the protest moved to the vicinity of the police station. All 22 activists spent their night in custody.  Later, in the morning the police invaded houses of some of the detained. They entered the premises without asking for permission and asked outrageous questions about, for example, protesters’ mental health.

Once again Polish authorities showed incredible arrogance, answering peaceful protest with repressions and violence. Over 100 people have their cases brought to courts of justice. Now, 22 activists are facing criminal charges. No matter how much force the state is going to put into stopping the protests, the actions are going to be continued in front of State Forests’ buildings all over Poland. 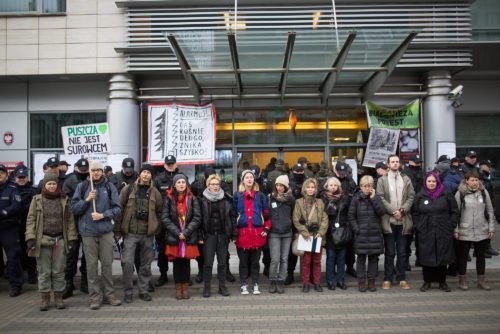