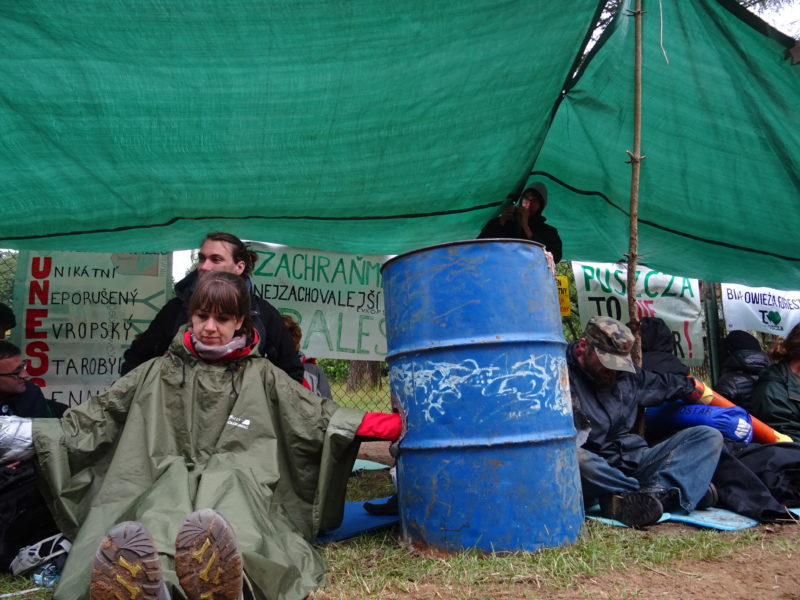 On Wednesday morning a decision will be taken at the UNESCO session whether to send a special mission to the Forest to investigate into the situation here or not.

Meanwhile, despite the reinforced control of the forest guards the 7th blockade of the heavy timber-harvesting machines started in the Forest on Tuesday, July 4. You can read more about the blockade here. In spite of the presence of the forest guards also two remaining stayed at the parking space in case they could be blocked too.

The protesters that come form Poland (from Dzika Polska and Camp for the Forest), the Czech Republic and the USA (from Hnuti Duha and Friends of the Earth) wanted to send their message to UNESCO and to the World. They asked for reaction in the situation when regulations are being violated and a World Heritage Site – destroyed by harvesters that fell a few hundred trees every day. 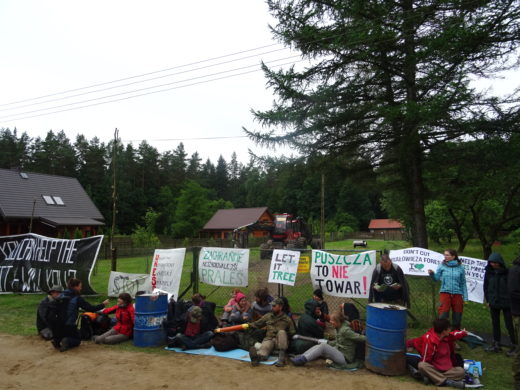 At the same time when the activists were using their own bodies to prevent forest trees from being cut down, when a demonstrartion in Cracow was taking place, Minister Szyszko has started to look for allies that could help him postpone UNESCO’s decision of inscribing the Forest of World Heritage in Danger List. Why? He wants to kill the decision concerning the Bialowieza Forest prepared by scientists who are UNESCO experts. According to this decision one more IUCN mission should be sent to the Forest (the first one was in 2016) to check if the forest management poses threat to wildlife and if the Forest should be inscribed on the Heritge in Danger List.

The decision also calls to stop the logging in old-growth stands without any delay. It points out that Polish government uses logging also to extract healthy, uninfested trees. What is more, it states that the logging was started without any assessment of its impact on those values of the Forest that were crucial for its designation as the World Heritage Site. Finally, it urges the government to prepare a new management plan that would protect the UNESCO site.

However, Minister Szyszko’s team prepared amendments to the Draft Decision. Their aim is to postpone the decision and the mission until 2019. Till then the current logging plan will have been fulfilled.

The Minister wrote a letter that was circulated among the delegates. In the letter he encouraged them to open a discussion over the Draft Decision. The Minister also enclosed in the letter his invitation to the Forest for July 8. in order to clarify the situation obscured by NGOs – a situation harmful for the foresters and blind to the needs of the local community, as Paweł Mucha, Ministry of Environment spokesman explained.

According to NGOs this ad hoc action is to replace a discussion based on scientific data prepared by IUCN.

Fingers crossed for the UNESCO decision!