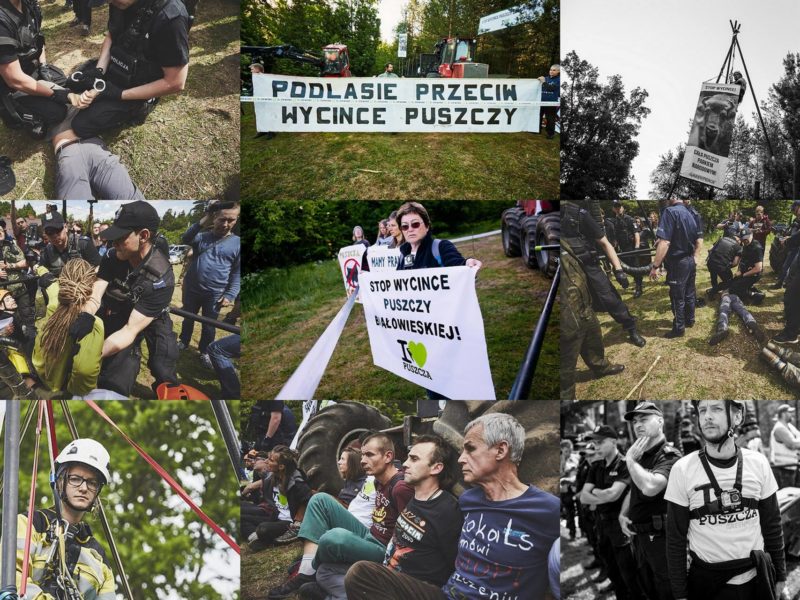 The first victory in court!

The court in Hajnówka passed a judgement today acquitting the activists who, on 8 June last year, blocked heavy equipment – a harvester and a forwarder – used for felling the Forest. It was decided that the defendants acted in a “state of need”. A few weeks ago, the very same Court in Hajnówka pronounced other activists, taking part in the same protest, guilty.

On 8 June 2017, a group of activists blocked two pieces of heavy equipment – a harvester and a forwarder which, in the days prior to the protest, were used to cut thousands of trees under protection of hundred-year-old stands in the Hajnówka State Forest District. Eight activists, men and women, Anna Błachno, Adam Bohdan, Aleksandra Markowska, Małgorzata Drozd, Michał Książek, Piotr Dankowski, Wioletta Smul, Zenon Kruczyński were acquitted for the act. Paradoxically, another judge from the same court in Hajnowka found the very same persons from the same protest guilty a few weeks before.

According to the argumentation presented by the judge, the people blocking the machines were acting in a state of high need, wanting to prevent the danger in which the Białowieża Forest was at. The defendants could not be seen as guilty of the acts they were charged with, as they stood in defence of the public good, at the cost of the work of the machine operators. In this case, the value of the good saved – the natural assets of the Białowieża Forest – was significantly higher than the value of the man-days of the machine operators. The judge compared the activities of the defendants to a situation of extinguishing a fire.

The judge considered, evaluated and commented on the individual actions and motivations of each of the protesters.

The court has presented a highly elaborate and impressive grounds of the judgement, quoting in abundance the various international obligations and conventions pertaining to nature protection which should also be followed by our country. It has also been noted that the present provisions do not guarantee sufficient public participation in forest management, which can lead to conflicts. An example of this is that it is impossible to legally question forest management plans.

The acquitted are very happy with the judgement.

I feel great joy and a great relief. This decision (of the court in Hajnówka!) lets us believe in the autonomy of at least some judges in our country. I hope that the other blockade cases will also end in acquittals. We have tried to prevent a barbarian destruction of a site which is a part of the World Heritage – said biologist and activist, Adam Bohdan.

I have also felt innocent and convinced about the cause of my actions. I also hope that justice will be done and that the foresters will be held liable for cutting down the Forest. The judgement of the court makes me only the more convinced that defending nature is the right thing to do – says forester, writer and activist, Michał Książek.

The activists from the Camp for the Forest have taken part in some 100 actions and blockades, for which they are now taken to court. There are dozens of criminal and civil suits filed by the State Forests for losses caused by blocking the illegal cutting of the Białowieża Forest.