As we have written in our previous post, on the 9th of November a peaceful protest took place in Warsaw at the entrance to the State Forests’ headquarters. It was broken by a violent police intervention.

As a result of the intervention 24 persons were brought to the district police headquarters at Opaczewska street in Warsaw. All of them spent the night under arrest, the last persons to be freed left the station only after 10pm on the following day. All the detainees were charged with violation of domiciliary peace (article 193 of the Polish Penal Law) while one person was additionally charged with violation of bodily integrity of a public official (article 222 of the Polish Penal Law).

There is a political decision behind such absurd level of repressive measures. The authorities are afraid of the social movement in the defence of Białowieża Forest and decided to chasten it using the police, and soon perhaps also the courts of law. It has been affirmed by unofficial statements of the escorting police who complained of engaging such large forces in this action. They indicated it’s an effect of a decision “from on high,” and they themselves would have preferred to be after real criminals.

However, the consent from above lead to a whole chain of infringements of our rights. Here you can find only a few most vivid examples quoted after the detained activists. They report:

– our lawyers were restrained at the police headquarters for over 90 minutes, preventing them from partaking in some of the actions undertaken upon us by the police; we were also not informed on our rights, including the one to inform our families about our detainment.

– we were all handcuffed behind our backs despite the fact that none of us resisted the police nor tried to flee; it constitutes a breach of the § 6 of the regulation on determining cases, conditions and methods of applying means of direct coercion by the police.

– some of us were humiliated, denied the right to use the toilet and it has been suggested we were paid for our actions; this constitutes a breach of the article 14 of the Police Act, section 3 on fair treatment of detainees.

– cash has been impounded from some persons for future penalties. Additionally, a digital camera has been taken away from one person. The items and money are to be returned, but why did it happen at all?

– body searches were conducted in a humiliating and unlawful way (§ 16 section 2 point 2 of the regulation on conduct while executing some police powers), including manual checks on whether we kept razor blades in our vaginas or anuses; we were told to undress in men’s toilet where outside officers of the opposite sex would enter without notice; we were stripped of our medicines and sanitary items.

While the activists were detained, the police conducted the so-called community interviews. They asked activists’ parents, neighbours, housemates questions about substance use, psychiatric treatment, relations with their friends and families and more. In one case they slammed into an apartment without consent, while people living there were still asleep.

Despite being under pressure to treat the activists like criminals, many police officers stood for the protection of Białowieża Forest in informal conversations and asked us about details. Some even declared admiration for their methods of protest.

Let’s sum up. About 80 Preventative Police officers and 20 forest rangers were engaged in suppressing the peaceful protest. After transporting the protesters to the headquarters at least (!) 70 other police were engaged to guard them, take statements, breathalyse us, frisk us and take them to police stations scattered around Warsaw and even outside the city (in Piastów).

The activists say, “We regard both the charges and the detention itself as political repressions and an attempt to criminalise and undermine a social movement. We stand against this: we are not guilty and we do not deserve this humiliating treatment. We are filing complaints against the decision on our detention and we will go against the breaches of law described above. Above all, we go on working on our issue and we’re not letting go as we know that the whole Białowieża Forest should be a national park. The repressive measures from the last days only strengthen our solidarity and bare the logging proponents’ lack of arguments. That may be why one of the commanding officers threw in a moment of frankness, ‘As for me you’ve already won.’” 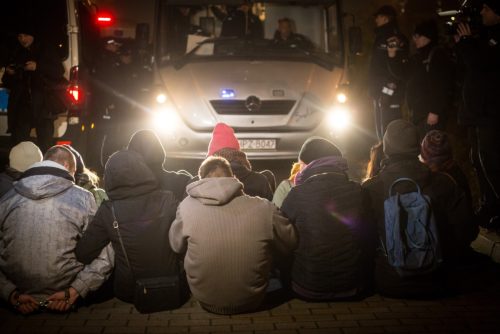 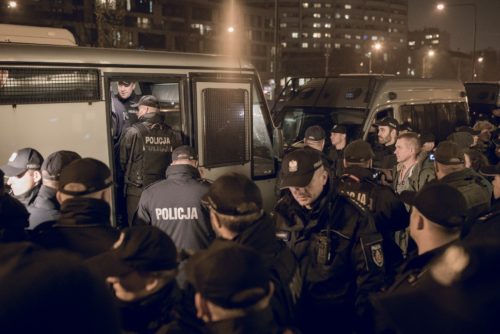