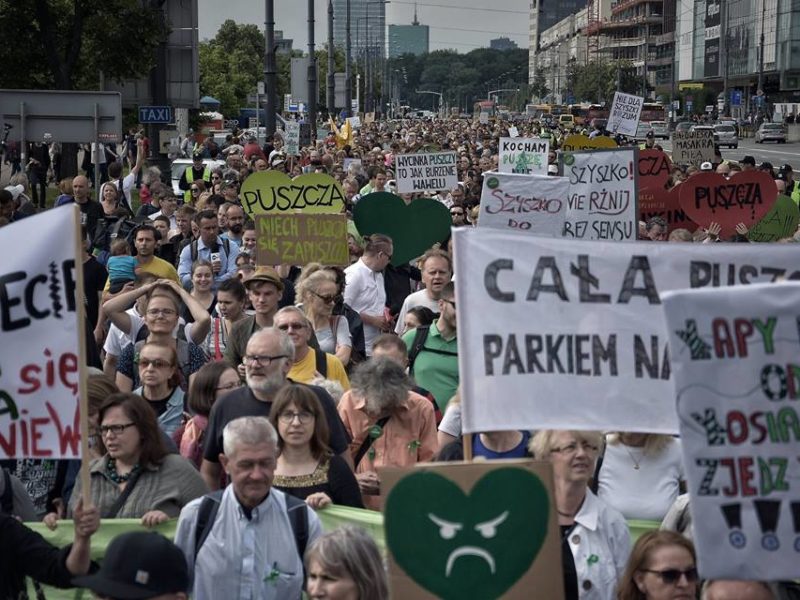 On Saturday, June the 24th, March for the Forest was organized in Warsaw. It gathered together about 5000 people and was the biggest march of solidarity with Bialowieza so far. People arrived from different places around Poland. They brought banners expressing their voices for keeping the wilderness, preserving biodiversity, leaving the Forest untouched and protected over the entire area as a national park. Many banners were signs of open protest targeted directly against Minister Szyszko and his devastating decisions and actions in the Forest.
It should be remembered that for people in Poland the Bialowieza Forest is a part of their national identity, something that everybody knows about and perceives as a symbol of Polish nature.

It was also yesterday that OKO.press – Polish independent news service, published results of a poll in which they asked who represents interests of the Bialowieza Forest in a better way: activists protesting against the logging or the State Forests.
1.5 times more Polish people expressed their support for the activists than for the State Forests that put into action the controversial policy of Minister Szyszko in which he uses police against the activists.
More and more Polish people cease to believe in Minister’s persuasions that the Forest can be healed by cutting it down and replanting it by foresters. However, PiS – the conservative party in rule – and its electorate support Minister Szyszko and spread the language of hatred across the media, calling not only activists, ecologists but also nature-lovers ‘ecoterrorists’ and enemies of the state.