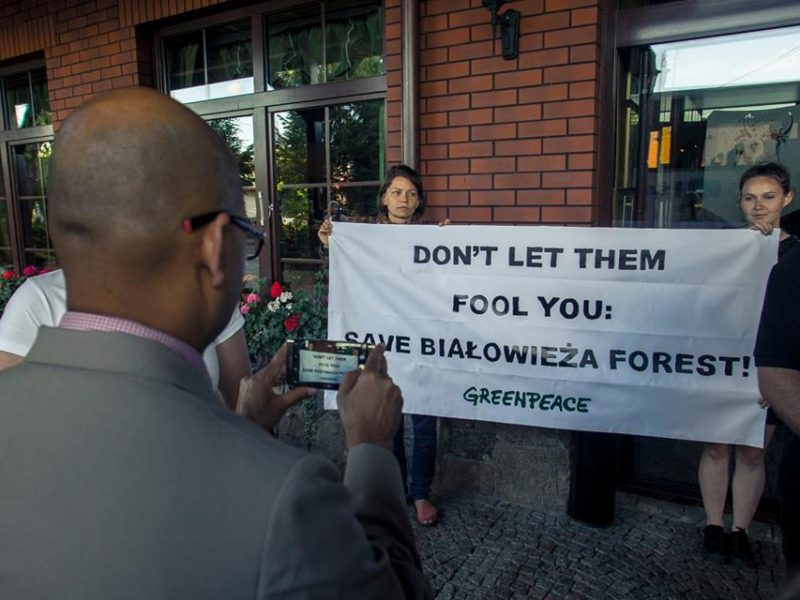 On June 22, 2017 Minister of Environment, Jan Szyszko visited Bialowieza. He was accompanied by representatives of countries that belong to the UNESCO Committee.

‘We want the Bialowieza Forest to serve for the whole world as a model in terms of economy and reasonable management of resources, so that that those resources could exist,’ said the minister in a contradictory way. Such is the idea of his policy: to help the forest by cutting it down.

Minister Szyszko also said that this year the Ministry of Environment with State Forests had started a special programme based on the idea that ‘one third of the manager area of the the forest remains untouched by the human hand. Two thirds of this managed area are intended for regeneration of natural systems where – according to EU’s regulations, defendind the EU’s regulations – we will try to revive what has started to disappear.’

It has to be remembered that the whole area of the forest is UNESCO World Heritige Site and that old-growth forest stands extend far beyond the national park and the reserves. ‘Regeneration’ taking place has three stages: logging, ploughing, planting and has nothing to do with a natural forest.

‘You can choose whose side to take; the protected 17,000 ha – which will be monitored in terms of succeeding changes and occuring species – or the other one, where in line with the EU’s law and by means of ecological engineering we will be restoring those habitats that have been destroyed.’ He also added that ‘these habitats will serve people and remain in excellent shape.’

Asked about a possibility of a dialogue, Minister Szyszko recommended referring to State Forests’ or the Ministry of Environment website where specific questions could be asked. Only after this kind of referrence can a dialogue be possible, he remarked.

Finally, asked whether Poland would apply for the change of Bialowieza Forest status, he replied that undoubtedly yes.