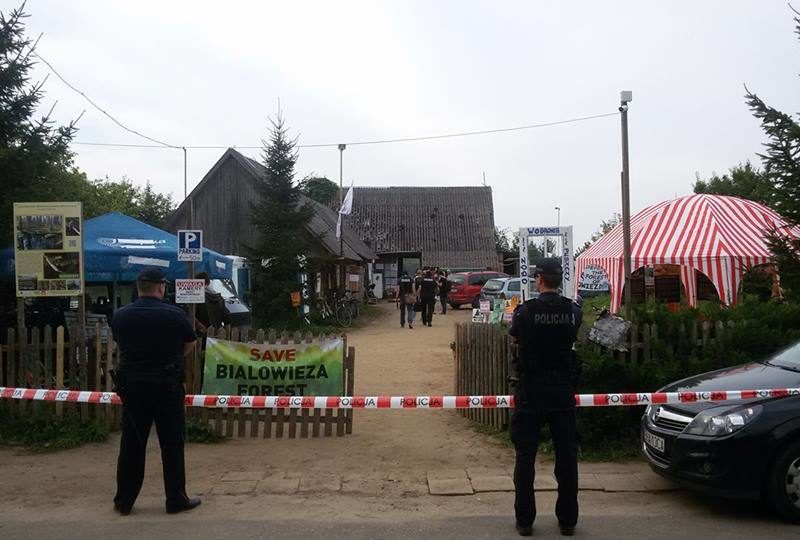 On Sunday (Aug. 20th) a march of foresters from all over Poland took place in Bialowieza.

After provocations from last week, this event is a demonstration of power.

So, first about the provocations. On the blockade of trucks a man with a mobile appeared at the site and started filming one of the activists from close up. Despite being asked not to do that, he wouldn’t stop. At some point, he dropped his mobile which was caught by the husband of the previously filmed activist. The husband put the phone back into the man’s pocket and said something to him in an irritated manner. It turned out that the man with the mobile was a priest, working for the State Forests (padre of the foresters). After a few hours he came back with his arm in plaster. Also the police arrived and arrested the husband for attacking the priest. Soon, right-wing media around Poland rumoured about the ‘bad’ activists that attack Polish priests.

Then, two days later, a special police squad with dogs came to the Camp for the Forest early in the morning and started searching the camp. Media were not allowed. The situation was not clear. Later however, it became known that the police were looking for drugs or other illegal substances, as they had received 11 anonymous tips. Of course, the camp was clear as no stimulants are allowed on its premises.

And on Sunday – the march of foresters.  A big one because 10 foresters from each forest district in Poland were delegated to Bialowieza for today’s march. The event was held to help the victims of hurricanes of Pomerania region (north-west PL) and Bory Tucholskie (central PL) from previous week and to show solidarity with minister Szyszko’s policy for the Bialowieza Forest. As far as help is concerned, uniformed forces from all over the country try to help the victims directly on the spot. Only the foresters travel to a completely different and remote region just to walk down the streets of Bialowieza. Besides, delegating a huge group of workers also involves huge costs that might be used for the victims instead.

Moreover, it does not seem ethical to combine into one the fate of the victims of a natural disaster with the illegal proceedings of the Ministry of Environment. After the ban of the EU Court of Justice, after the UNESCO decisions, against Natura 2000 regulations etc. a march is taking place in Bialowieza, in the already divided community, and the idea of logging is further promoted. What is overlooked, however, is the fact that the surplus number of forest guards from other regions ovesees harvesters instead of offering help where it is really needed, and that those who organize the solidarity march call ecologists names like ‘green devils’, ‘eco-nazis’ and ‘satanists.’

The march is another of the series of ‘spontaneous’ events by Polish foresters, who obey their bosses, even though they do not always share their opinions but don’t want to lose their stable, well-paid jobs.