At the 41st UNESCO session in Cracow Poland was urged to

On July 5, 2017 the UNESCO World Heritage Committee has adopted a decision today urging Poland to immediately halt all logging and wood extraction in the old-growth forests of Białowieża. The decision follows the advice of the International Union for Conservation of Nature (IUCN) – the official advisory body on nature to UNESCO’s World Heritage Committee, which meets this week in Kraków, Poland.

IUCN is expected to carry out a mission to assess whether the site’s unique values, which include intact ecological processes, are at risk.  Poland has been requested to submit a report on the conservation of the site by December 2018. Should danger to the site’s Outstanding Universal Value be confirmed, Białowieża will be considered for inscription on the List of World Heritage in Danger in 2019.

Quoted from IUCN website where more information can be found.

The DECISION itself can be found under this link.

Activists on the blockade on July 5 called UNESCO to voice their support for protection of the Forest.

Listen to their call.

Although Bialowieza Forest is a UNESCO World Heritage Site, what is more, the only natural UNESCO site in Poland, it keeps being logged despite UNESCO regulations.

Before the UNESCO session that took place in Kraków, Polish Minister of Environment said that Bialowieza Forest was added to the UNESCO list illegally. Scientists, activists, nature lovers, many local people were alarmed. UNESCO status of the Forest cannot be endangered!

You can read more about UNESCO in connection with the Forest below.

Bialowieza Forest, as the last natural lowland forest of Europe, was designated a UNESCO World Heritage Site already in 1979 – first, only the National Park (the strict reserve). In 1992 the Belarusian part of the Forest joined the respected list. Finally, in recognition of its unique values and after a couple of years of efforts, in 2014 all of the Forest was inscribed on the UNESCO list. Thus, only on the Polish side, the property was enlarged form 5,069 to 59,576.09 ha.

Bialowieza Forest includes a complex of lowland forests that are characteristics of the Central European mixed forests terrestrial ecoregion. The area has exceptionally conservation significance due to the scale of its old growth forests, which include extensive undisturbed areas where natural processes are on-going. A consequence is the richness in dead wood, standing and on the ground, and consequently a high diversity of fungi and saproxylic invertebrates. The property protects a diverse and rich wildlife of which 59 mammal species, over 250 bird, 13 amphibian, 7 reptile and over 12,000 invertebrate species. The iconic symbol of the property is the European Bison: approximately 900 individuals in the whole property which make almost 25% of the total world’s population and over 30% of free-living animals.

The property is an irreplaceable area for biodiversity conservation, due in particular to its size, protection status, and substantially undisturbed nature. The property is home to the largest free-roaming population of European Bison, which is the iconic species of this property. However the biodiversity conservation values are extensive, and include protection for 59 mammal species, over 250 bird species, 13 amphibians, 7 reptiles, and over 12,000 invertebrates. The flora is diverse and regionally significant, and the property also is notable for conservation of fungi. Several new species have been described here and many threatened species are still well represented.

Quoted from UNESCO website where you can head for more information.

Bialowieza Forest is a large, coherent area of undisturbed woodland, which fact was emphasised as significant for nature conservation. According to UNESCO requirements, only ecosystems like wet meadows, wetlands and river corridors were to be maintained through active management (hay cutting). Apart from that, the management was to be aimed at conservation to preserve Forest’s natural values.

In 2015 new forest management plans were introduced by the State Forests (Lasy Państwowe). Timber extraction was increased. The outbreak of the spruce bark beetle and a big number of dead spruces served as an excuse for increased logging. The Ministry of Environment and State Forests claimed that the cuttings were necessary to maintain unique forest stands, which in turn was explained as in line with Nature 2000 and European Union’s regulations. Scientists, ecologists, European public opinion were alarmed by the extend of human activity taking place in the Forest. According to previous regulations, the managed part of the Forest was divided into four zones and only one of them was managed in an active way. However, in March 2016 Konrad Tomaszewski, the general director of State Forest, issued a decision according to which 33% of the Forest (apart from the protected areas) became the so called refence areas, and as such, without any human activity. The remaining part was to be managed in an active way and was subject to sanitary cuttings in order to stop the bark beetle outbreak and ensure safety (e.g. along the roads). Also the amount of timber to extract was risen from 63,500 m3 to 188 m3 for the years 2012-2021. In Spring 2017, despite birds’ breeding season, heavy timber-harvesting machines started working in the Forest – for the first time ever in its history. The logging has been continously taking place far away from any tourist routes and dead trees that were already left by the bark beetle are being felled even in old-growth forest stands at an incredible pace.

Undermining the importance of UNESCO

On June 21, 2017 Minister of Environment, Jan Szyszko said in the Polish Parliament that the Forest had been illegally inscribed on UNESCO World Natural Heritage List. According to the Minister, the forest should have been inscribed on the Nature and Culture Heritage List, as it had been shaped by the human hand. Saying that the forest is natural is, as the minister claims, not true. He also added that the case had been brought to court. He pointed out that he would ask for crossing the Bialowieza Forest out of UNESCO list.

UNESCO summit in Cracow and Heritage in Danger List

Between July 2 – 12 the 41. UNESCO summit is going to be held in Cracow. About two thousand participants are expected. During the meeting also the Bialowieza Forest issue will be discussed. The UNESCO Draft Decision states that: ‘increased logging is likely to adversely affect the conservation of the site’s habitats and species as well as cause irreparable biodiversity loss, including removal of 100-year and older trees, and that these measures would, according to the evidence available, exceed those that would be necessary for ensuring the safe use of the forest.’ Moreover, the State Party of Poland is requested to ‘maintain the continuity and integrity of protected old-growth forest in Białowieża Forest and to immediately halt all logging and wood extraction in old-growth forests, and to clarify third party reports about logging targeting species other than those affected by bark beetle, which cannot be justified as so-called sanitary cuttings.’ It is also said that a special Reactive Mission should be invited to the property to  evaluate current and potential impacts of ongoing and planned forest management operations on the OUV  (outstanding universal values) of the property and to assess whether the property meets the criteria for inscription on the List of World Heritage in Danger.’

Quoted from UNESCO website where more detailed information can be found. 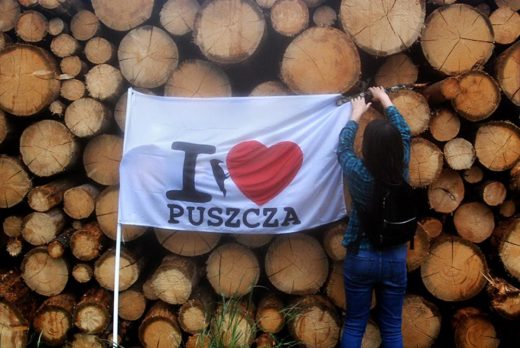